The Toughest Hiking Trails to Conquer in the U.S.

Got a bit of an outdoors itch? Hiking is the best way to see all of America’s natural splendors, from the expansive, mountainous terrain of the West to the pine-peppered hills of the Catskills. Experienced hikers know that there’s nothing quite like the views, fresh air, and feeling of accomplishment that comes over you at the summit of a particularly tough terrain.

Hiking is like an addiction and, the more you do it, the more you need. But you don’t have to travel to Machu Picchu to get a good dose of challenge and adrenaline. There are plenty of all-American hikes that’ll put even the most experienced hikers to the test.

Here’s our bucket list of trails for experienced hikers, with super-challenging hikes that traverse through scenic deserts, mountains, coastal landscapes, and natural plains. Note: While this list includes a mix of day hikes and overnight hauls, all of these trails are meant only for advanced hikers.

If you’ve never hiked a particularly difficult trail, then we recommend trying out some easier day hikes before conquering these routes. Make sure that you’re always well-prepared for anything these hikes throw your way by packing a portable water filter, emergency survival supplies, and plenty of sustenance! 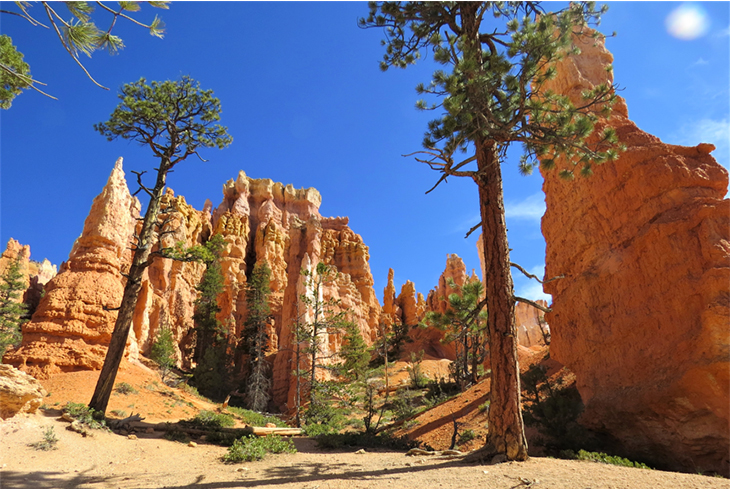 The Pacific Crest Trail (PCT) is a must-hike for serious adventurers, as it provides unaltered access to some of the most breathtaking natural sites in the U.S. Spanning 2,659 miles from British Columbia to Southern California, this West Coast long-distance hike takes hikers about five months to complete from start to finish. You don’t have to commit to the whole thing to get a good workout, though. The Washington portion of the trail is, by and large, considered the hardest stretch, with super-rugged passes and rocky terrain at every turn. We recommend trying the portion that extends from the Bridge of the Gods into the Cascade Range in Washington.

As far as mountain hikes go, there’s no place richer with scenery and outdoor opportunity than Zion National Park in Utah, home to some of the most colorful and humbling natural sandstone structures around. You’ll get a good glimpse of what Zion has to offer when you hike Angel’s Landing, a 5-mile (round-trip) hike that takes you on a journey to 1,488 feet into the sky. The majority of the trail is considered relatively approachable for hikers at all levels, but it’s the final half mile that ramps things up, quite literally. During this portion, the trail gets super-steep, but there are chains in the mountain to guide you.

The Appalachian Trail, or the App Trail as it’s known to many, is similar to the PCT in that it is its sheer longevity that makes it so difficult. The trail spans about 2,200 miles, from Mount Katahdin in Maine to Springer Mountain in Georgia. Only an estimated 12,000 people have hiked the full length of the trail, proving that it’s one of the toughest of Holy Grail hikes on the map. Yet you don’t have to complete it from start to finish to get a good challenge. The Mahoosuc Mile in Maine, a 1-mile section of the trail, is considered one of the most challenging portions of the trail due to its treacherous boulders, caves, and steep drops.

THE MAZE AT CANYONLANDS NATIONAL PARK

Canyonlands in Utah has a reputation for being remote, demanding, and breathtaking in scope. It’s no picnic. In fact, it was the site of Aron Ralston’s 172-hour ordeal wherein he was forced to amputate his right forearm with a multi-tool. In other words, this terrain isn’t for the faint of heart, and should only be traversed by experienced hikers and mountaineers. If you fit the bill, The Maze is one of the most gratifying hikes in the U.S. It’s wild and untamed, and there are portions of the trail where you’ll feel like you’re the only person in the universe. You’ll need two days to complete it, with about 9 hours of hiking time total. Once you reach the Maze Overlook—the crown jewel of the trail, complete with expansive views of colorful, naturally carved sandstone buttes—you’ll feel like it was all worth it. 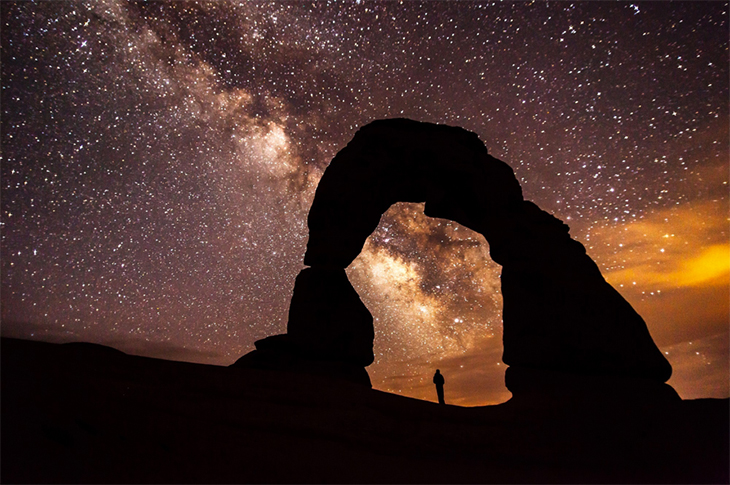 The hardest trails in the U.S. aren’t all out west. In fact, scaling Mount Washington in New Hampshire’s White Mountains is one of the most rewarding journeys for American adventurers. Follow the Great Gulf Trail along the Peabody River to Mount Washington to hike through a breathtaking combination of dense forest and massive, glacial boulders. The trail itself runs for 7.5 miles and ascends to 5,000 feet. Although many longtime hikers choose to complete the trail in a single day, it’s not a bad idea to spread it out over two days so that you can properly enjoy the scenery. There are a few designated campsites along the trail for those who prefer to hike the trail overnight. Oh, and did we mention that it can get super-cold—below freezing, to be clear—at the peak? Make sure to pack your cold-weather gear!

It wouldn’t be a hiking bucket list without a trail traversing the Colorado Rockies. Longs Peak is considered one of the range’s toughest trails, guiding you to a peak at 14,259 feet—the highest summit in the national park. If you want to add a mountaineering aspect to your hike, Longs Peak is one of the best places to do it. The Keyhole Route is a popular climbing destination featuring sheer, vertical rock faces with narrow ledges, steep drops, and loose rock. For the hiker who dares to scale the peak, the views are unbeatable. You’ll catch pristine glimpses of the snow-capped Rockies, with a rugged and seemingly desolate view of the magnificent landscape. In the wintertime, the hike is an especially technical challenge and is only recommended for those with advanced climbing equipment and skills.

Often considered one of America’s most dangerous hikes, this Alaskan wonder takes adventurers up some 20,000 feet and has been known to put them face-to-face with all sorts of predators, including bears. It’s so treacherous that only about half of all who set out to scale Mount McKinley complete the challenge. This hike isn’t the best option for adventurers who don’t have professional climbing skills, and it shouldn’t be attempted without the proper gear. 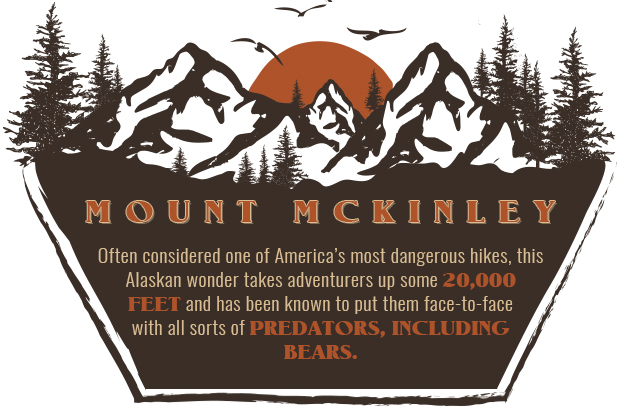 Adventure-oriented travelers know that Hawaii has more to offer than white, sandy beaches and tiki bars. The Kalalau Trail spans the length of the Kauai coast, running approximately 11 miles from the shores of the Pacific to the Kalalau Valley, offering the 22-mile round-trip journey of a lifetime. It’s consistently rated one of America’s most dangerous and most beautiful hikes, known for its physically demanding nature and scenic views alike. What makes it so challenging are its miles of exhausting switchbacks and super-steep ledges and ridges. What makes it so beautiful is its 360-degrees of rugged coast, offering otherwise off-limits access to views where the rugged boulders meet turquoise waters. There are also a few waterfalls, remote beaches, and unspoiled mountain views along the way. Sign us up.

Yellowstone is a unique place. On one hand, it’s one of the most accessible national parks for hiking, drawing nearly 4 million visitors per year. On the other hand, it’s an experienced outdoorsman’s dream come true, with plenty of ridiculously challenging trails and passes to the summit. Electric Peak in Wyoming offers well-prepared hikers an experience of a lifetime, with a perfect mix of wildlife, plains, and peaks, in true Yellowstone style. This is a 20.6-mile out-and-back trek that finishes with 360-degree panoramic views of the park via Electric Peak. It’s beloved among challenge hikers because it takes you up to an elevation of nearly 11,000 feet, promising a good mix of tough terrain and sweet views. The majority of hikers who conquer Electric Peak complete the journey in two or three days.

DEVIL’S PATH IN THE CATSKILL MOUNTAINS

Often considered one of the most challenging hikes in New York’s Tri-State area, Devil’s Path is a must-hike for East Coast adventurers or anyone who wants to check off a big challenge on his or her bucket list. This 24.2-mile hike spans across the Catskills in Upstate New York, offering hikers unspoiled views of the Catskill High Peaks. It also offers access to five of the peaks—Indian Head Mountain, Twin Mountain, Sugarloaf Mountain, Plateau Mountain and West Kill Mountain—making it an extremely popular choice for climbers and hikers alike. The point-to-point trail shouldn’t be completed in full on a day hike. Most people hike the trail in two or three days.

There’s good reason why the Maroon Bells in Colorado have earned the nickname “The Deadly Bells,” which is printed front-and-center on a U.S. Forest Service Sign on the access trail. We probably don’t have to explain why but, suffice it to say, the nickname arose after eight people died in five separate accidents in a single year in 1965. However, prepared, experienced hikers can safely traverse the 11.5-mile south ridge in the right conditions. This trail takes you on a journey of steep paths, loose rock fields, and treacherous weather, with the trail getting tougher and tougher the higher you ascend, but the reward is measurable. You’ll experience ridiculous views of the Elk Mountains, which are some of the most-photographed peaks in all of America.

Grand Canyon National Park is by no means a sparsely visited American landmark, but, when you hike its Bright Angel Trail, you’ll feel a sense of remoteness that you won’t get along some of the park’s more well-worn paths. The 10-mile trail is situated at the bottom of the Grand Canyon, descending over 4,000 feet to the Colorado River, with an average 10 percent grade along the entire length. The amazing views of the colorful canyon make it a worthwhile adventure for intermediate and expert hikers. Because the trail is so well-maintained, with access to shelters and fresh drinking water along the way, it makes a good challenge hike for those who have never backpacked before. Hikers often stop for the night at Phantom Ranch for more comfortable accommodations, but there’s also a campground along the route.

When you think of challenging hikes, North Carolina probably doesn’t immediately come to mind, but the Slickrock Creek Trail again challenges the notion that America’s toughest terrains are in the west. This trail is part of the Joyce Kilmer Slickrock Wilderness Area in Western North Carolina and offers 13.2 miles of trail that ascends to about 5,000 feet. The most challenging aspect of hiking Slickrock concerns its notorious fords, which can be extremely difficult to conquer when waters are high. The final three miles are considered some of the toughest, with a steep incline that finishes at the Naked Ground Trail junction. Slickrock is a good choice for climbers who appreciate a lush landscape, as it takes you through plenty of forests and puts you in close proximity to some amazing wildlife, including bears. 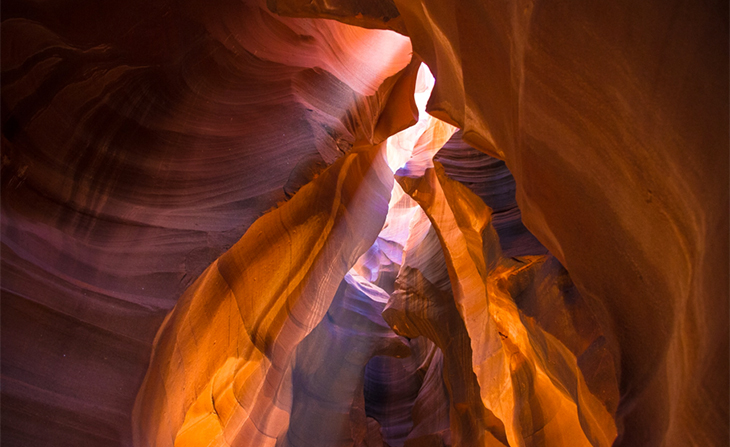 Hiking Grand Teton National Park in Wyoming is a rite of passage for many dedicated wilderness lovers, and Paintbrush Canyon is one of its crown jewels. This 18.1-mile backcountry hike goes from Paintbrush Canyon to Cascade Canyon Loop, offering an elevation of 4,570 feet. During the overnight hiking journey, you can expect to see incredible views of the canyon, and you might even catch a glimpse of some wildlife, including moose! This hike should be completed in at least two days, and there are plenty of good points to stop and pitch a tent along the trail. The loop trail takes you up and over Paintbrush Divide at the heart of the Teton Mountain Range, where the views are unbeatable.