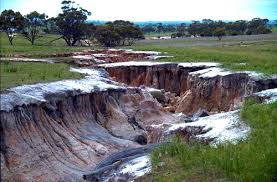 Our planet’s surface undergoes a process called erosion, whereby materials gradually diminish from the surface over a specific time period. Erosion transports solid material through hydraulic or Aeolian actions within the natural environment; it resides and then results in the deposition of these solid materials on a separate landmass. This process usually occurs by the transportation of solid materials by the elements, creeping soil, gravity, and other living organisms. Human occupation has expedited the natural process of erosion, especially in regards to industrial agriculture, deforestation, and urban regionalization. However, the science community has developed technology to limit erosion, such as no-till, tree planting, and terrace-building. If left untreated, excessive erosion can lead to serious problems, such as water sedimentation and ecosystem damage.

Wind erodes the surface of a barren landmass in arid climates. Wind circulates and pushes particulates across wide bodies of water; a process known as deflation, which eventually leads to erosion. In addition, these particulates may collide with solid objects causing erosion by abrasion; a process known as ecological succession. Generally, wind erosion occurs in areas devoid of vegetation and rainfall to support growth, such as sand dune formation on a beach or desert.

Wind erosion produces yellowish sediment called loess. Loess has a porous, brittle, finely grained composition. It usually covers hundreds of square miles, and may measure up to tens of meters in overall thickness. Loess may stand in steep or vertical faces. It develops into highly rich soils, and may become a rich source for agricultural production if exposed to adequate weather conditions. Due to its geologically unstable nature, loess deposits erode at a rapid pace. As a result, farmers plant windbreaks to reduce the overall wind erosion of loess.

Geological landscapes may erode from one of five types of water erosion. Splash erosion occurs from the overall detachment and air transmission of soil particulates caused by excessive rainfall. Sheet erosion occurs from the detachment and movement of soil particulates by rainfall and sheet formation, instead of rill beds or water channels. The rainfall tears apart the sediment, which allows for soil particulates to re-fill the pores produced by the rainfall. Once the surface pores top off with soil aggregate, the water starts to lower off infiltration rates, thus causing runoff to take place.

Rill erosion occurs with the formation of small, short-lived flow paths that function as sediment transference systems for sloping hills. Rills become active in areas where water erosion increases on disturbed landmasses. The flow depths of rills reach a few inches deep, which make them quite steep. As the rill beds change, the overall hydraulic flow dynamically changes the erosive rill patterns. The overall flow velocity, depth, width, slope, and detachment rate effect the formation of each rill bed. The flowing water enables the detachment of more sediment. If the overall rainfall rates exceed the soil’s infiltration mechanism, then it may actually result in the increase of more erosion than the rainfall’s impact.

Gully erosion occurs as water flows down narrow channels after rainstorms and melting snow. Unlike rill beds, gullies typically remain intact, despite the surrounding tillage operations. A gully ranges in varying depths, usually ranging around one or two feet up to as much as one hundred feet. A continuous, linear water flow causes stream erosion. Stream erosion extends downward, deepening existing valleys, and expands the valley into the mountainside. Stream erosion occurs vertically, and each valley has a cross section where the gradient remains relatively steep. The erosive activity transitions into lateral erosive activity, which expands the valley floor. The stream sediment becomes flattened, which leads to the deposition of sediment as the stream flows along its floor’s plain. Stream erosion occurs more intensely during flooding. Kolks, vortices, and rock-cut basins are formed as a result of environments heavily affected by stream erosion.

Ice erosion occurs in one of two forms, the movement of glaciers, or thawing processes. In the latter formation, water inside pores and rock fractures expand, which causes further cracking. Glaciers erode through one of three different processes, including abrasion, plucking, and thrusting. Debris caught in the basal brushes along the bed, which polishes and gouges the rocks underneath. Glaciers also cause bedrock to fall off during the plucking phase. In addition, glaciers freeze and then move forward, which dislodges the sediments at the glacier’s base. The latter method produces thousands of lake basins that lie across the edge of the Canadian Shield. All of these combined processes form moraines, drumlins, kames, moulins, and glacial erratics, especially at the glacier retreat.

Extreme cold weather temperatures cause trapped water particles to expand in its cracks, which breaks the rock into several pieces. This senior care leads to gravity erosion, particularly on steep slopes, and the formation of scree at the bottom of a mountainside. Morning thaws can present structural problems for roads alongside mountain cliffs. Additionally, trapped water in the wedge of a rock causes fissures, which eventually breaks down the rock.

Follow these links to learn more about geological erosion processes: