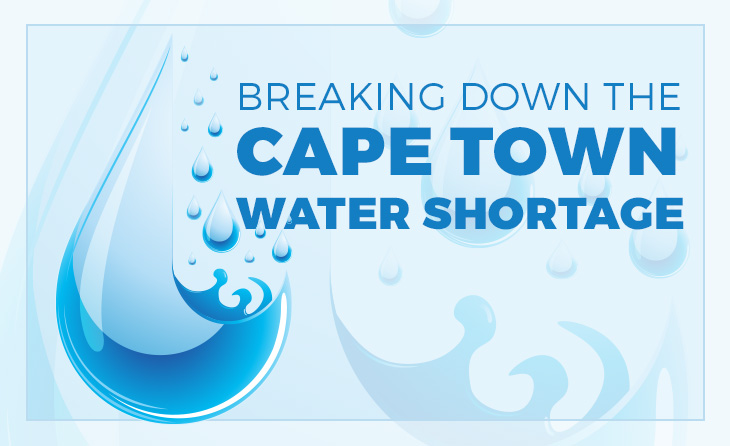 Food, water, and shelter—three of the basic human needs that none of us can do without. In most places in America, it never even occurs to us to worry about these things. We have access to clean water and household water filters that can provide for those of us who get the heeby-jeebies from tap water. Most of us can just push a button and get clean water straight from our refrigerators. But, knowing that, what would you do if the water suddenly ran out?

That's the situation that the South African city of Cape Town is currently facing. This city of some four million people has been facing years of a protracted drought, as well as a government that has been dragging its feet on providing alternative water sources for its citizens.

Cape Town has seen a massive population jump from 1951, when it had a reported 441,209 citizens in the city and 577,648 in its greater urban surroundings, according to the United Nations Statistics Division. Now it is nearing four million people in total, and the water issue is set to affect everyone, albeit in different ways. 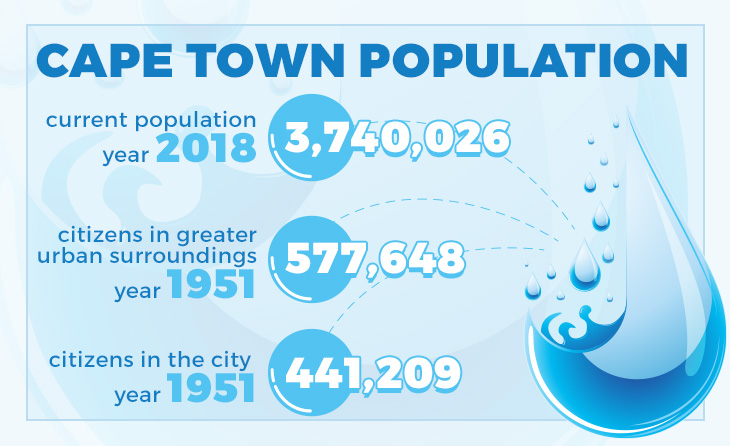 The drought has been ongoing since 2015, hitting the Western Cape province of South Africa, most notably Cape Town. Because of the drought, dam levels are at critically low levels and the massive city has planned for an event they are calling “Day Zero,” a day that will mark the first time in modern history a major city has ever run out of water.

Cape Town regularly experiences the standard warm, humid Mediterranean climate and, because of that, it depends on rainfall in the months of May and August to replenish the six major dams that supply its water.

Given how little the population was in 1951, it stood at some 2.4 million in 1995 and, now, in 2017, is estimated at 4.3 million. As the population increased, so, too, did the need for water. Some areas in Cape Town are glimmering gems in the city, with beautiful homes and pools that, obviously, need water.

Of course, as with any disaster, someone pointed out the possibility of Cape Town running into water issues as early as 1990. In his article "Cape Town Will Run Out of Water in 17 Years,” Barry Streek of the Water Research Commission hinted that Cape Town would one day be at risk. Even though the nineties featured eco-warrior and superhero Captain Planet, it seems like neither of them was heeded and, now, Cape Town may very well be making history in the worst of ways.

The First to Reach Day Zero

According to an article by the AP, Cape Town has declared a “Day Zero,” a date on which they predict they will need to turn off most of the water taps in the city due to the drought mentioned earlier. Initially planned for April, they are now pushing back “Day Zero” until July 9th and simultaneously expecting that the seasonal rainfall due to hit in May might be low.

Because of these expectations, many are predicting that the citizens of Cape Town will be forced to either find their own solutions by spending outrageous sums of money for bottled water or simply hoping that the government will find a solution in time so they are not forced to pick between eating and buying water.

Inequality in the Basics Needed for Life 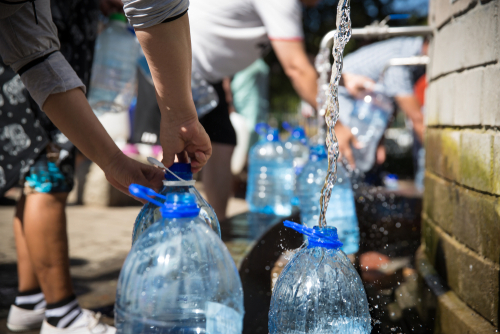 Many are predicting that this will quickly become one more thing that separates the wealthy from the poor in Cape Town.

Cape Town has seen a long, torrid history of inequality, tension, and racial inequality. Many citizens of Cape Town still see the scars of that inequality, with the white-ruling historical decisions having kept many native Africans in poorer conditions and, thus, more vulnerable to the upcoming crisis of the taps potentially running dry.

Wealthier citizens of Cape Town have options such as hiring companies to dig boreholes or wells, buying and hoarding bottled water in massive quantities, or investing in desalination machines to access groundwater.

Bear in mind that the homes in the richer portions of Cape Town can sell for ten million dollars apiece, and each of these services can easily cost thousands of dollars. The rich of Cape Town are joining waiting lists for some of these services and doing all they can to not only hoard drinking water, but to keep their luxurious pools filled for both drinking water and leisure purposes, though one would hope it was solely for the sake of storing drinkable water. Unfortunately, for the poor of Cape Town, those options simply are not realistic.

What of Those Less Fortunate?

Some articles on the subject paint the picture of a community of some two hundred people sharing communal water taps, such as the Gugulethu settlement. Settlements like these are the byproducts of Cape Town's long, violent history and the communal taps are some of the very little form of government assistance that they receive. 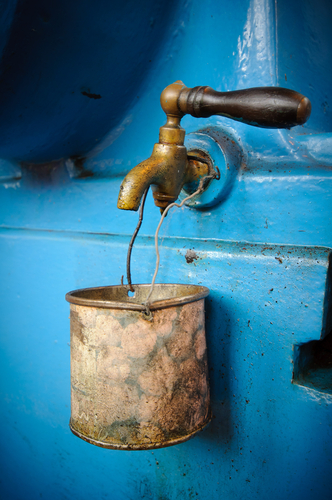 Gugulethu remains a painful example of the white-minority rule and was the scene of the deaths of black activists that sparked a major moment in the history of apartheid. Even after apartheid ended, this neighborhood remains largely occupied by low-income residents. They've seen the brunt of the years-long drought affecting Cape Town, and it is not hard to see that they will continue to take the worst of it. They, like many of the poor of Cape Town, are reliant on the government for answers—a government that has not won a lot of trust or faith with its actions, truth be told.

Strangely enough, though apartheid has ended, the inequality in South Africa remains among the highest in the world. An article by the Economist explains that South Africa has the world's highest Gini coefficient, which is a measurement of inequality. However, the inequality no longer falls as heavily on race but, instead, economic status.

It is a classic case in which the rich keep getting richer, and said rich are part of only a small elite versus the majority population, which lives in poverty. Statistics do show that, while things are improving in an economic sense, things still haven't picked up since the economic crisis of 2009.

An article written in the Guardian by Oliver Wainwright, based in Cape Town, brings to light the sheer level of inequality between economic classes. He writes of a woman named Nomfusi Panyaza who lives in the township of Khayelitsha, and of her life. It’s a powerful read.

It paints a bleak picture for the poor of Cape Town during the crisis, though the Cape Town government tells a different tale. Most people in first world countries cannot imagine being surrounded by sewage, much less being without their water filters to give them the clean water they are accustomed to. It is clear that the government in Cape Town needs to handle this situation delicately and wisely.

The Washington Post wrote an article on how Cape Town’s government is responding to the water crisis and how they plan to move forward. The government is offering a great deal of optimism.

In the same article, however, some are skeptical about the government being able to actually step up and handle the issue for those in poverty-stricken areas. The same article has a quote from a business owner with a great stake in the crisis: 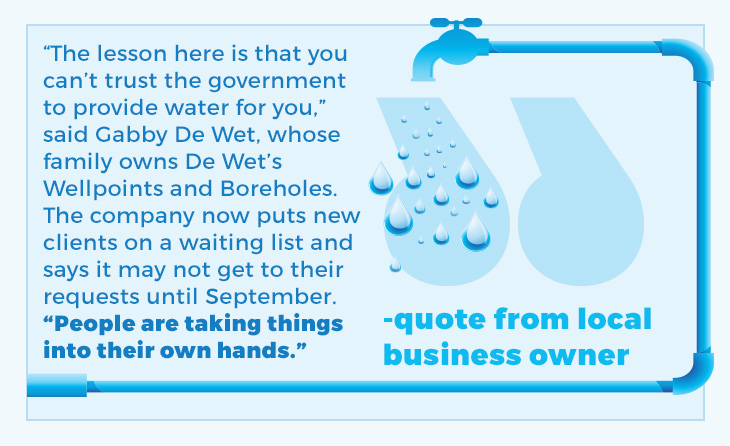 “The lesson here is that you can’t trust the government to provide water for you,” said Gabby De Wet, whose family owns De Wet’s Wellpoints and Boreholes. The company now puts new clients on a waiting list and says it may not get to their requests until September. “People are taking things into their own hands.”

Officials report that they are trying to take as diplomatic an approach as possible to the situation, going as far as opening up the springs at the base of Table Mountain but, as the location is miles away from civilization and the denizens relying on it have no public transportation to rely on, it is far from an ideal solution.

While “Day Zero” has not yet arrived, and there is still time for the government to step up, the situation, unfortunately, looks dire for the poor of Cape Town, such as the Gugulethu settlement, who are still facing the possibility of choosing eating regularly over being able to afford bottled water.

How Farmers Are Coping 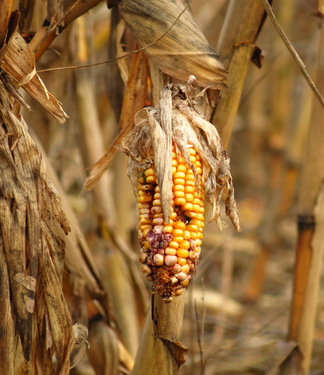 Some of the tension was alleviated by the many farmers that work millions of acres worth of land near Cape Town. The numerous farmers have already had to work with a drought-stricken land without the benefits of the urbanization of Cape Town and, thus, have learned how to reduce their water usage exponentially.

According to an article by Quartz Africa, farmers in Cape Town have a great deal of experience in saving and conserving water, even during wetter years.

It is noted, however, that the farmers do not carry the burden of supplying water to as massive an area as the entirety of Cape Town. While their efforts have pushed back the advent of “Day Zero” a few months, the drought is still a consistent problem that does not look to be alleviated anytime soon. Until “Day Zero” officially hits, we won't know the full extent of the damage that will be done.

Who Will Be Next?

It goes without saying that water scarcity is a very real problem that could soon threaten even more major cities around the world. According to an article by the BBC, “over one billion people lack access to water and another 2.7 billion find it scarce for at least one month of the year.”

The same article goes on to list another dozen or so cities that could face the same issue that Cape Town is currently facing. Cities from Moscow to Miami could soon be facing this same scenario, and it will prove to be something that will further drive home not just the problem of inequality, but of the fragility of the ecosystems we rely on and the desperate need to engage in ecosystem restoration.

It is only in times of crisis that we really see the inequality between classes and how their governments treat each group. We can only hope that Cape Town will treat its poor well, and that this will serve as a lesson to the rest of the world on water conservation.