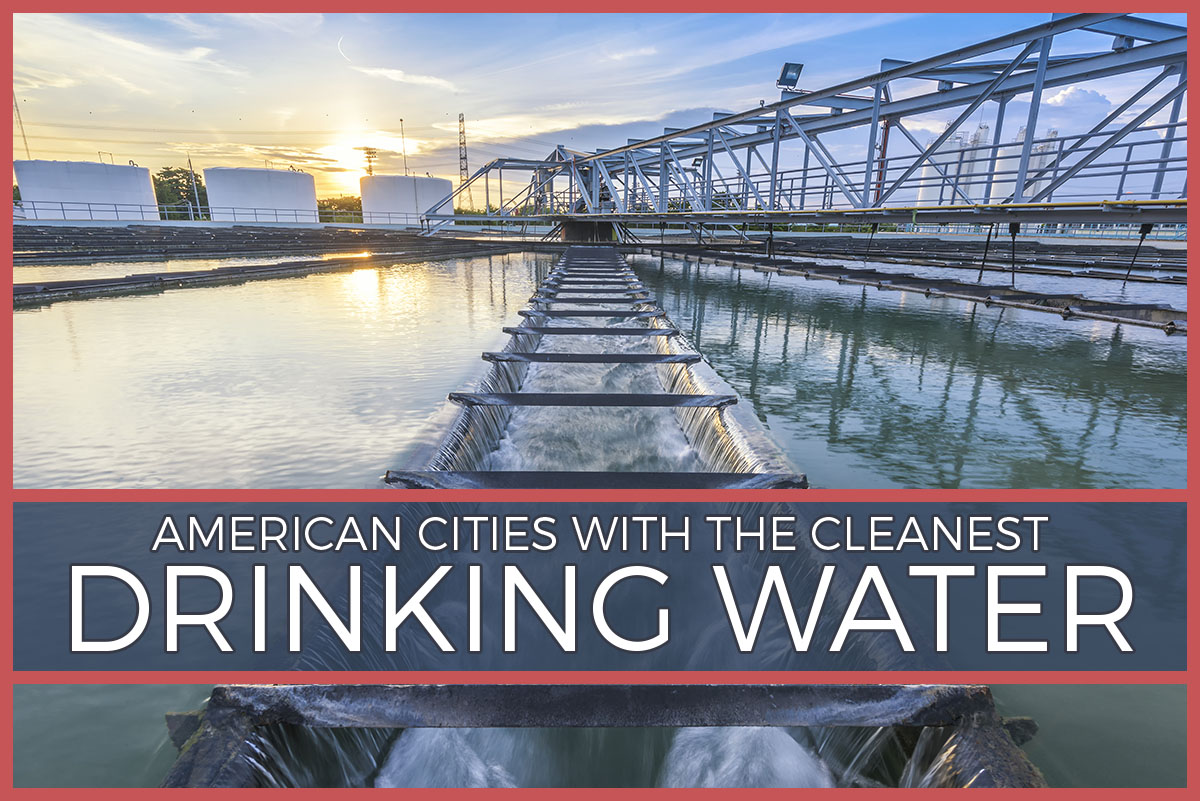 The United States enjoys one of the most reliable and safest supplies of drinking water in the world. In 1974, Congress passed the Safe Drinking Water Act (SDWA) to protect public health, including the regulation of public water systems. 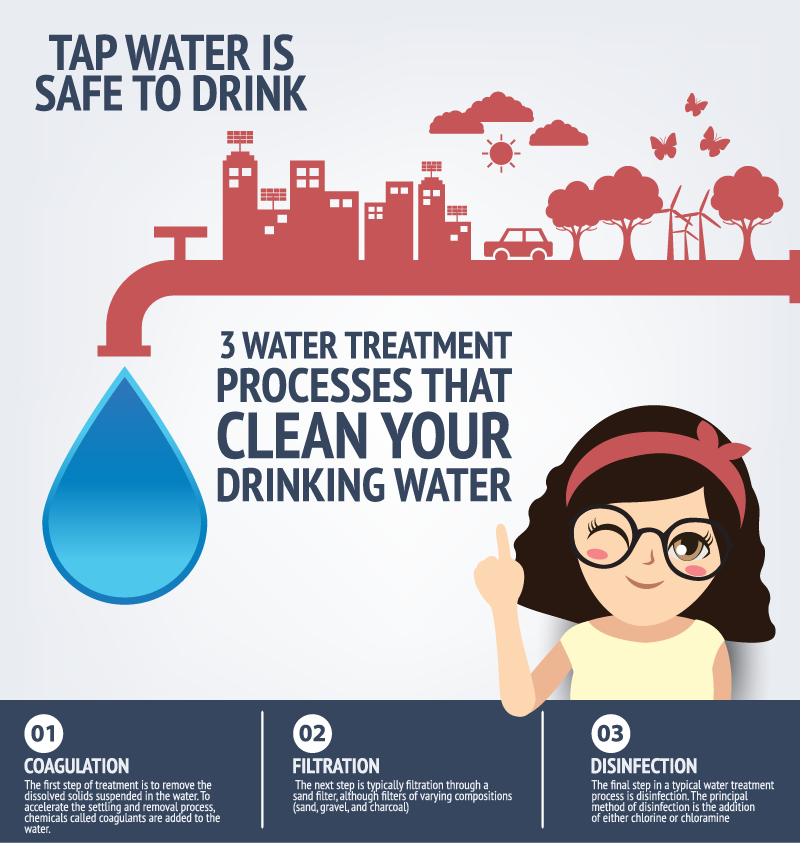 Every few years, several organizations conduct studies of drinking water quality and publish their findings. These studies are not necessarily comparable since the criteria used to analyze the water quality is different. However, the results do indicate which cities have successfully invested in water treatment and, therefore, provide water that meets or exceeds EPA standards.

The Forbes “Best Cities for Drinking Water” list is based on data from consumer confidence reports provided annually by community water systems and compiled by University of Cincinnati researchers. The “United States Drinking Water Quality Study Report” covers 77 metropolitan statistical areas—about 62% of the U.S. population. Rankings are based on levels of the cloudiness of water or turbidity, bacteria, haloacetic acids (a byproduct of drinking water disinfection) and lead.

Had the second lowest level of bacteria in its drinking water and ranked in the top 15 for lowest levels of lead, turbidity, and haloacetic acid.

Was among the top 10 metropolitan statistical areas for lowest levels of lead, turbidity, and haloacetic acid.

Ranked in the top 10 for lowest levels of turbidity and haloacetic acid.

Ranked in the top 25 for the low levels of bacteria, lead, turbidity, and haloacetic acid.

Scored in the top 10 for the low amounts of bacteria and lead. Levels of turbidity and haloacetic acid were more middle of the road among the cities on the list.

Ranked in the top five for lowest levels of lead but had higher levels of haloacetic acid, bacteria, and turbidity.

Had one of the lowest levels of turbidity, but its level of haloacetic acid was above average among the cities on the list.

Among the top 15 for its haloacetic acid and lead levels, and its bacteria level was well above average among the cities on the list.

Had a low level of bacteria; however, levels of lead and haloacetic acid were about average among the cities on the list.

Had low levels of bacteria and lead, but its level of haloacetic acid was well above average among those cities on the list.

Most of us take for granted the tap water we drink every day is safe. In fact, drinking water supplies in the United States are among the safest in the world. However, even in the U.S., drinking water can become contaminated with disease-causing agents and, therefore, requires treatment.

Drinking water usually originates from a freshwater lake, river, or a well. The water from these sources may contain disease-causing agents and most certainly will contain dissolved solids.

The first step of treatment is to remove the dissolved solids suspended in the water. To accelerate the settling and removal process, chemicals called coagulants are added to the water. A common coagulant is aluminum sulfate, but this varies by water treatment plant.

This chemical has a positive charge which neutralizes the negative charge of the suspended solids, like clays or silts, and allows for the particles to stick together. The solids formed, called floc, settle out of the mixture in a sedimentation basin, allowing clean water to flow out via a weir. 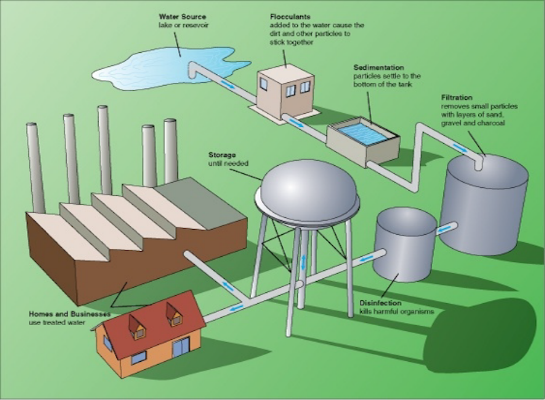 The flocculation and sedimentation process removes the larger particles in the water, but some smaller particles, as well as chemicals and bacteria, may remain. The next step is typically filtration through a sand filter, although filters of varying compositions (sand, gravel, and charcoal) and pore sizes are used to remove dissolved particles, such as dust, parasites, bacteria, viruses, and chemicals. Sand filters have been an effective method of filtration since the beginning of water treatment, and they are included in the treatment process to assure a standard level of clarity.

After passing through a sand filter, the water should meet local code requirement for water clarity—normally a turbidity of less than .3 NTU. At this point the water is clear; however, bacteria are still present.

The final step in a typical water treatment process is disinfection. Approved by the U.S. Environmental Protection Agency (EPA), the principal method of disinfection is the addition of either chlorine or chloramine. These chemicals kill disease-causing germs such as Salmonella, Campylobacter, Norovirus, and any other remaining parasites, bacteria, and viruses.

Various methods can be used to achieve safe levels of chlorine in drinking water. Chlorine is available as compressed elemental gas, sodium hypochlorite solution (NaOCl), or solid calcium hypochlorite (Ca(ClO)2). While the chemicals could be harmful in high doses, when added to water the dilution contains low levels that kill germs but are still safe to drink. 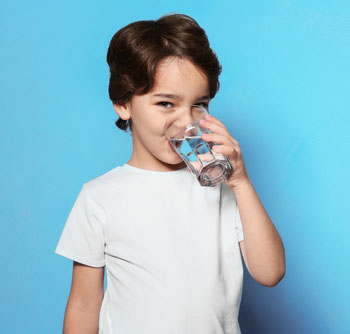 Chlorine reacts with organic material left in the water and may create disinfection byproducts which can result in carcinogens or other harmful chemicals. It is, therefore, added at the last step when most of the organic material has already been removed. During the distribution process, the chlorine remains actively present in the drinking water, keeping pathogens from entering the water from pipes or other contamination sources. Chlorine levels up to 4 mg/L are considered safe in drinking water.

Ozone is widely used for drinking water treatment because of its excellent disinfection and oxidation qualities.

Ozone is a gas comprised of three oxygen atoms, which has a greater disinfection effectiveness against bacteria and viruses than chlorination.  In addition, the oxidizing properties can also reduce the concentration of iron, manganese, and sulfur, and reduce or eliminate any taste and odor problems.

Organic particles and chemicals are eliminated through either coagulation or chemical oxidation. Ozone is unstable, and it will degrade over a timeframe ranging from a few seconds to 30 minutes, depending upon the water chemistry, pH, and temperature.

During the process, clean, dry, air is passed through a high-voltage electric discharge (corona discharge), creating an ozone concentration of approximately 10,000 mg/L. The raw water is then passed through a venturi tube, creating a vacuum that pulls the ozone gas into the water, or the air is then bubbled up through the water being treated. The ozone reacts with metals to create insoluble metal oxides and, therefore, requires post filtration.

Research studies have proven the safety and benefits of fluoride. For more than 70 years, people in the United States have benefited from drinking water with fluoride, leading to better dental health. Because of its contribution to the large decline in cavities in the United States since the 1960s, the CDC named community water fluoridation one of the 10 greatest public health achievements of the 20th century. Fluoride is usually added during the last step of the water treatment process.

Once water has been filtered and disinfected, it is ready to be pumped into the distribution system. A constant pressure of 40 psi must be maintained to keep water from inflowing into the pipes at certain high elevation points. If water pressure drops below a certain level, the system must be flushed to reduce the risk of contamination.

Even though EPA regulates and sets standards for public drinking water, many Americans use a home water treatment unit to improve the taste of drinking water or to remove some contaminants that remain in the water supplied by the municipality.

Water Softener: Reduces the hardness of the water using sodium or potassium ions to replace calcium and magnesium ions.

Disinfection: A physical or chemical process that deactivates or kills pathogenic microorganisms.

All the cities that top the various lists of best drinking water share the same key characteristics: A sparkling clean water source, high-tech filtration and treatment, plus careful testing.

As an example, let’s look at the city that made the top of Forbes list of cities with the best water.

The main water source for the L.D. McMullen and Saylorville Water Treatment Plants is shallow groundwater collected from wells along the river. This utilizes the earth's natural filtering process through coarse sand and gravel which delivers water free from river sediment. The Fleur Drive plant draws water from either the Raccoon River or the Des Moines River.

DMWW’s laboratory performs 30 daily tests on the untreated water sources, which allow the staff to identify any necessary changes needed in the treatment process before the water enters the plant. Then 50 to 100 tests are conducted each day to ensure the highest quality water is produced.

The laboratory also conducts a progressive research program, including several research projects and studies throughout the year. Perhaps other municipalities can follow this example and test their water accordingly to ensure residents are drinking the cleanest drinking water possible.

Contact your local water supplier and request a Consumer Confidence Report. In it, you will find a list of contaminants that have been detected in your water supply. Find out if the levels meet state and EPA drinking water standards. Most likely, you will discover that your tap water is safe for drinking!